Mount Evans, Colorado is the site of North America’s highest paved road, the Mount Evans Scenic Byway, reaching a staggering height of 14,130 feet.  At that altitude, there is 42% less oxygen in the air than at sea level. This is a bucket-list, epic climb.

I was scheduled to be in Denver for a work assignment ending on Friday afternoon, so I extended my trip in order to ride up Mount Evans on Saturday.

I rented a lightweight Scott road bike and an SUV in Denver, and on Saturday morning I drove about 45 minutes west of Denver to Idaho Springs, where the 27.4-mile-long climb begins at an elevation of 7,526 feet.  From there, the road gains nearly 7,000 feet in altitude.

I departed Idaho Springs at about 9 AM and began the long climb on steady gradients and a good road surface with little traffic.  A fast-moving river ran alongside portions of the road. There is little development as the climb moves away from Idaho Springs, and the quiet climbing was hard but peaceful. The road surface was very good.

The first significant landmark along the climb is Echo Lake, about 10 miles uphill from Idaho Springs.

Echo Lake is a pristine beautiful mountain lake, reflecting the high peaks around it.

As the climb continued, the top of Mt. Evans and the long, snaking road leading up to it, appeared occasionally through the tall trees, as if to almost taunt – can you make it up here?

The climb continued ever higher.  After nearly two hours, Echo Lake, which I had ridden around earlier in the morning, was far below the road-to-the sky that I was riding on. Puffy white clouds drifted by at the same elevation as me.

The road continued ever upwards, with some steep pitches but mostly steady 5-8% grades, until finally I reached Summit Lake, where a short stretch of flat road provided a final respite before the final push to the summit. 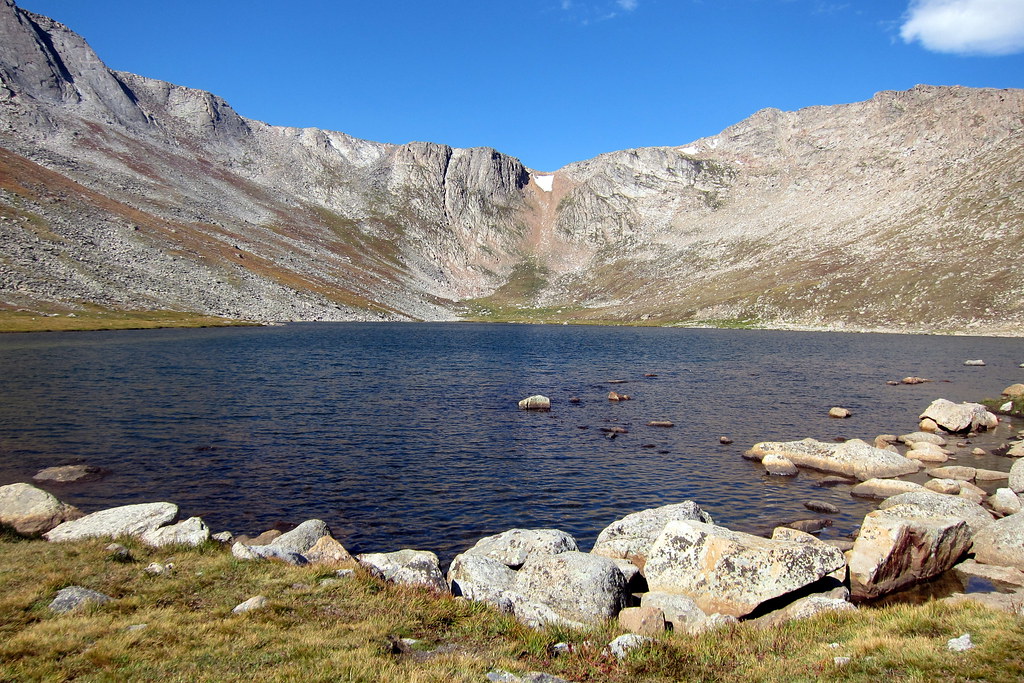 The last 5-mile stretch from Summit Lake to the summit has some sharp switchbacks and less-than-perfect surfaces, but these can all be tamed on a good, lightweight road bike with the right gearing. As I got closer to the top, the thin air and the sheer length of the climb started taking a toll but the summit, visible from many of the switchbacks, helps motivate me for the final few miles.

At long last, at about 1 pm, I reached the end of the road – the top of Mount Evans – higher than the surrounding clouds, and still covered in snow, in Mid-June.

Visible in the background is a red car snaking its way up the switchbacks.

The ride down took about 45 minutes of high-speed brake-shredding descending. After the switchbacks closer to the top of the mountain, the road straightens and you can really open it up to speeds exceeding 50 mph if you are brave enough.